“For every action there is an equal and opposite reaction, plus a social media overreaction” 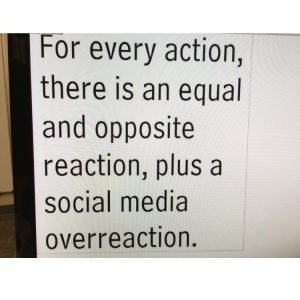 Something that sounds so negative is actually one of the best Social Media marketing advices for the auto industry.

The most expensive part of the SM campaign is the ad, the graphics, the campaigns can actually be done once and reused (settings wise) with minor modding from one to the next.

The inexpensive campaign uses the same ad for the entire month.

The more expensive campaign uses the ad for a week, it touches its target, gets a reaction , analyzes the reaction (calls vs clicks vs form subs vs etc). Makes changes and it goes out again.

After 1 year one of them had 12 rounds of evolution, the other will have 52.

Which one will be more advanced? Who will know more about its market?

Social Media’s advantage over traditional is the speed of feedback. Find the (over-) reaction to your campaigns.

← Auto dealers be aware of Ransomware
Machine learning at its best! →